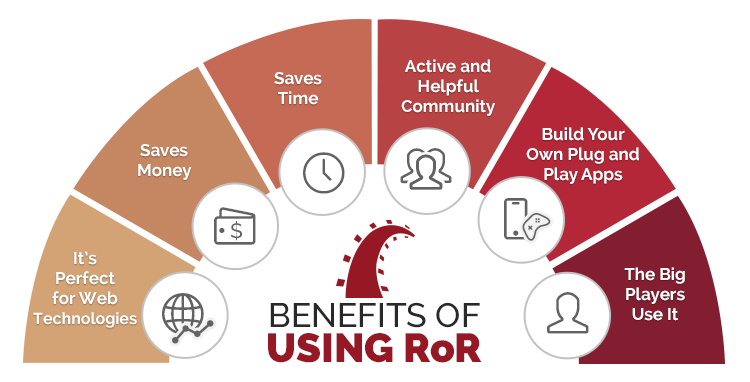 How Web Developers can Capitalize on RoR

Ruby on Rails (RoR) is a multiplatform web development application that is written in Ruby under the MIT License. This is an open-source framework based on the MVC (Model View Controller) pattern and is one of the preferred options of web development company today.

RoR is not only popular with new and small businesses but also attracts large companies. It is a well-established programming language, which has similar integration with Perl and Python, etc.

Pros of Ruby on Rails for web development

One of the most important factors in favour of RoR is that the programming language is easy to learn, understand and read. Not only does it use simple English, but it also uses its domain-specific language which leads to effective development as stated by the web development company.

As stated earlier that Ruby on Rails is an open-source framework programming language. It is available at no cost, which means that even if you have a tight budget in hand, you can continue with RoR without thinking twice.

And, therefore, it is considered the best option for new businesses and new business ventures, most of which are not very financially sound. The advantage that RoR has over other programming languages ​​is that it is accessible under the MIT License, which is a free software license allowed introduced by the Massachusetts Institute of Technology (MIT).

Ruby on Rails is also blessed to have a rich source of libraries that help accelerate the web development process. RoR software has been designed in such a way that it gives priority to the convention rather than the configuration. This facilitates the work of the web development company since they don’t have to think too much while maintaining the flexibility and customization of the framework.

Modules are another vital asset that can be used to organize Ruby’s classes, constants and the methods that unify them in a category or unit. The writing of modules or class is more or less the same; The only exception is that the module starts with a module keyword and not with a class keyword.

You may have created the best web application without errors, but you may experience some problems later for which you should be prepared. Therefore, it is the benefit of clean codes in Ruby on Rails that will prove to be a saviour.

However, RoR is an exceptional case in which moving code conventions becomes easier from one developer to another. It is clean and clear and, as stated before, it is also quite easy to understand. Any developer can use it and doesn’t have to start everything from the beginning.

The Ruby on Rails is adequately easy to maintain due to the joint advantage of Ruby and the Rails, which offers a venerable service. Besides, the RoR also receives extensive support from the large community of talented web developers, who are always there to help you.

It also gets the help of a community called RubyGems, which helps with hosting solutions. The robust programming language is highly productive and helps create faster web applications as experienced by the web development company.

There can be no doubt in mind that Ruby on Rails is one of the powerful and effective web development frameworks that global developers like Moz Web Development use. As such, the number of users increases and that is because it offers many opportunities and makes the development procedure faster and easier.

To comment on this article and to know more about web development and web designing, please check: Moz Web Development